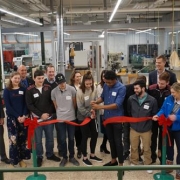 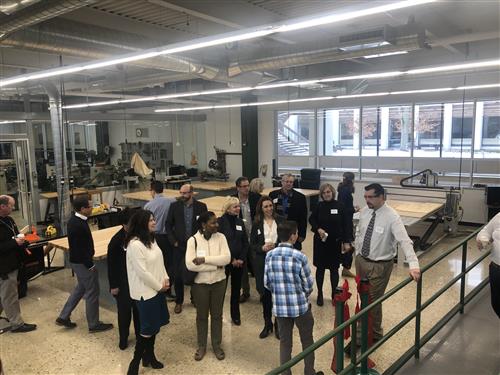 The Wauwatosa School District celebrated the completion of its new $1.3 million Wauwatosa Center for Design and Innovation on Thursday, January 30 with a ribbon-cutting and tours of the renovated space located inside Wauwatosa West High School. The school is an EDUcation member of the Woodwork Career Alliance of North America.

City, state, and business leaders were invited to celebrate the new Center, which is the district’s first Fabrication Lab. In the Center, students have access to digital manufacturing, CNC, and traditional manufacturing equipment, as well as design software.

“The Center for Design and Innovation is about just that – helping students to be creative, problem-solve, develop solutions, innovate ideas, and collaborate – all core competencies of our vision for every Wauwatosa graduate,” said Superintendent Phil Ertl. “This space is also about reframing what it means to pursue technical education and preparing students for in-demand, high-paying jobs in the trades.”

The new machines that have been added will allow Wauwatosa students to train on state-of-the-art equipment they would find in the real world, preparing them for careers of the present and future.

“We literally can design and make almost anything. For this reason alone our ability to research and develop solutions to problems is unmatched in the area,” said Bill Morse, a former technical education teacher at West High School who is currently working in a consulting role on the project. “The combination of the modern facilities, cutting edge equipment and technology, growing industry connections, committed teachers from across varying curricular areas and leadership makes Wauwatosa a true leader, not only in Tech Ed, but within the maker space community in the state.”

Three separate rooms, which included wood and metal shops were converted to an open space where students can see the entire process of design and manufacturing from the brainstorming phase, to design, to product development. 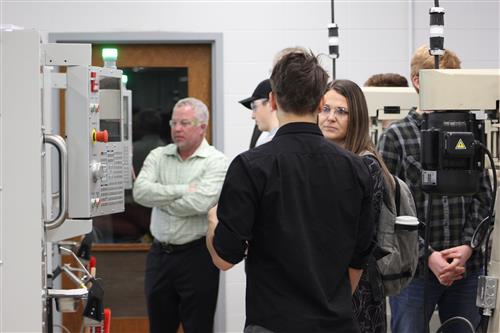 The Wauwatosa Center for Design and Innovation was completed through a phased renovation of the technical education space inside Wauwatosa West High School, with the first phase of work completed in summer of 2018. The second phase began in summer 2019 as one of the projects included in the District’s facilities referendum. The District has also been awarded several grants toward the project, including a $24,000 grant from the Wisconsin Economic Development Corporation (WEDC) in 2019.

The Center for Design and Innovation will support the Wauwatosa School District’s ongoing efforts to ensure its students are college, career, and life ready and will expand the District’s offering of hands-on learning in science, engineering, art, and math.

Students from both Wauwatosa high schools are able to take courses in the center. In the future, the goal is for students who are not taking one of the anchor courses designed for the Center for Design and Innovation to be able to use it on a walk-in basis or when their clubs meet. During that time, they will be able to tinker, explore, and invent using the various pieces of digital equipment, under the supervision of a staff member.

The long-term plan is for the District to allow all Wauwatosa residents access to the Center, creating a community-based experience.