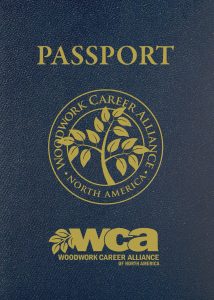 Instructors find that implementing the WCA’s nationally-recognized skill standards creates a sturdy framework not only for teaching students about essential tools and techniques but also for evaluating their ability to apply what they learn.

The Passport is an individual’s record of the woodworking skills the holder has achieved. Accumulating Passport points is a resume builder for students looking to forge a successful career in the woodworking industry after they graduate. As Greg Larson, instructor at the New England School of Architectural Woodworking puts it, “Earning WCA credentials gives them one more thing that the next person doesn’t have. It gives them a leg up on the competition.”

What follows is a snapshot of how each of these four diverse and heralded postsecondary programs has embraced WCA skill standards and Passport credentials.

Maine College Is WCA Passport Champ
No institution has issued more WCA Passports than Eastern Maine Community College (EMCC). Entering this year, 149 students of the college’s Fine Woodworking and Cabinet Making program have received a Passport, a number that will grow by 30 more this year says Les Stackpole, faculty and department chair.

The Passport holders fall into one of two distinct programs offered at EMCC. First there are students who attend the college’s two-year woodworking program to earn their associate degree. The other group consists of dislocated workers, most of them from the area’s shuttered paper mills, who receive federal assistance for training to embark on a new career.

“About 100 of the Passports were issued to workers who lost their jobs and come here a six-month intensive woodworking course,” Stackpole says. “We’re able to help set them on a new career path.”

Students of the two-year program are required to get a WCA Passport at the start of their second semester. “By then they know if woodworking and carpentry is for them and whether they will stick with the program,” Stackpole says.

Students are evaluated on their skills and receive Passport points for the hand and machine skills they successfully demonstrate. “They usually end up with more than 30 WCA credits required for their WCA Green credential after two years here,” Stackpole says. “The Green level is an option. We usually have three or four students who graduate with a Green credential.”

Stackpole says his graduates usually have multiple job offers. “The students with the Green credentials are the most sought after because employers know that they are the cream of the crop. They can get into a bit of a bidding war for better pay and a better benefits package.”

Stackpole is a WCA chief evaluator and has such has trained five others to be WCA accredited skill evaluations, including one who is on his staff.

Stackpole is excited that four area high schools are ramping up WCA EDUcation programs for their high school wood shops. “Students who earn their WCA Sawblade certificate in high school will receive three credits if they enroll in our program,” Stackpole says. “It’s great to see the WCA credential program gain momentum.”

Madison College Raises the Bar
Incoming students at Madison Area Technical College now receive a WCA Passport as part of their tuition and earn a WCA Sawblade Certificate when they complete their first semester of training.

“We have formally integrated the Sawblade Certificate into our curriculum,” says Patrick Molzahn, director of Madison College’s Cabinet & Millwork program and a member of the WCA Board of Directors. “As part of their first semester coursework, all students are taught and evaluated on the skills for a WCA Sawblade Certificate. That includes measuring and layout, and basic set up and operation of a table saw, jointer, drill press and portable hand sander. Once they have successfully demonstrated their abilities they take an online test to earn their certificate.

“By integrating the Sawblade Certificate into our curriculum, students begin to understand the process and requirements of the WCA Passport credentialing system,” Molzahn says. “This experience better prepares them to shoot for Green and Blue level credentials beginning in their second semester. Earning WCA credentials is a great opportunity to show their sincere interest in pursuing woodworking as a career to a prospective employer.”

First semester students who previously earned their Sawblade Certificate in high school can begin earning their Green Credential right away.

“We are seeing more and more students arriving with the WCA Passport,” Molzahn says. “Wisconsin has the largest concentration of high school WCA EDUcation members in the country. As a result, we are able to take students further in their credentialing journey.

“Getting students credentialed to the WCA Skill Standards raises the bar for all that we do,” Molzahn adds. “Our ultimate goal of being a WCA EDUcation member is to improve our training and make it more relevant to industry.”

“The majority of our students have a hidden disability like attention deficit disorder, autism spectrum disorder or vision or hearing impairment,” says Wellever, an early adopter of the WCA’s credentialing system. “Our goal is competitive employment. Everyone who is accepted into this program has been assessed to determine that they are likely to be successful professional woodworkers.”

The MCTI woodworking program consists of up to 7, 10-week terms with the majority of students graduating at 40 weeks. “The WCA Skill Standards are beneficial particularly in the early stages of the program,” Wellever says. “While we occasionally get students with lots of prior woodworking experience, we assume that our first-term students have no prior experience, especially when it comes to teaching them about safe operation of machines. We start with all of the basic stuff – using a tape measure, jointer, planer and table saw – then work on up.”

Students are issued a WCA Passport when they begin their second term. “If a student makes it through the first 10 weeks, he is likely to make it the rest of the way,” Wellever says.

“Students who complete all four terms graduate with a WCA Green Credential,” Wellever adds. “They all have the competency of at least one high-tech machine be it a moulder, CNC router, edgebander or veneer sander. Most of our students are competent on numerous high-tech machines, plus the basic machines like table saws.”

Wellever says his graduates are highly coveted by woodworking companies. “We always are at, or near 100 percent placement,” Wellever says. “Having the Green Credential will help the students down the road with their careers but because this program has been around a long time, we’re already kind of a go-to place.”

The average starting wage for MCTI graduates is $13.75 hour, plus benefits, Wellever says. “We track our graduates, currently, those who have been on the job for a year are making an average of $963 a week. It’s a very living wage.”

WCA membership has its privileges, Wellever saysl “Being an EDUcation member of the WCA and subscribing to its Skill Standards brings a lot of objectivity to our program. I think one of the greatest side benefits of belonging to the WCA is the networking that we do with other member schools, also, articulation with high school programs here in Michigan.”

NESAW Takes the High-End Road
The New England School of Architectural Woodworking (NESAW) offers an intensive 5-month program each spring. “We treat our program like it’s a job,” says Greg Larson, director of NESAW. “Our students train eight hours a day, five days a week. Most of their training revolves around building a high-end custom kitchen for someone in our community.”

Most of NESAW’s students are in their late 20s or early 30s. “We get a lot of career changers,” says Larson, a member of the WCA Board of Directors and winner of the 2017 WMIA Educator of the Year Award.

To get his students up to speed, each of them receives a WCA Passport and is trained and evaluated to earn the WCA Sawblade Certificate. “Beyond that, they all have the opportunity to go for the Green Credential because they learn more than enough skills and put in enough hours to earn that,” Larson says. “Even though in this day and age we have no problem placing a successful student with an employer, I still encourage them to get their Green Credential to help them stand out from other applicants, but it’s totally up to them.”

Larson says woodworking companies are slowly beginning to understand who the WCA is and why it’s mission to develop Skill Standards and career paths is so critical to the future success of the North American woodworking industry.

“From an employer’s point of view, having a credential process tied to nationally recognized standards and not just my particular whims as an instructor is a big plus,” Larson says. “The WCA Skill Standards bring an important element of professionalism to the industry which is why I’m using them in my program.”

Learn more about the Woodwork Career Alliance and its Skill Standards and Passport credential program.