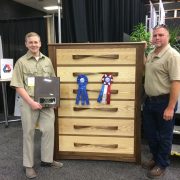 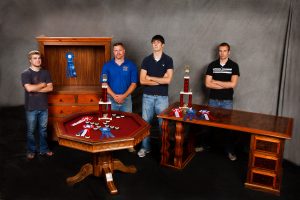 Joe Davis, second from left, with students and their award-winning projects.

Lutz Woodworks of Wylie, TX, has the distinction of being the first company to sign on as an INDustry Supporter of the Woodwork Career Alliance of North America (WCA).

The architectural woodworking company’s $250 sponsorship fee will help three students at the Dale Jackson Career Center (DJCC) in Lewisville, TX, cover the cost of their skill standard assessments. Each of the high school seniors is striving to earn his Green Credential, the first of five WCA woodworking professional credential levels.

Greg Lutz, vice president of Lutz Woodworks and president of the Texas AWI Chapter, said he views the sponsorship as an investment in the industry’s future. Lutz is a strong advocate of career and technical education (CTE). He not only has a seat on the DJCC advisory board, he also serves as an advisor for his local high school district.

“It’s easy to take for granted what a high school program like this one can make,” Lutz said.

Through his involvement with SkillsUSA Texas, Lutz met Joe Davis, mill and cabinet instructor at DJCC and an active member of the SkillsUSA cabinetmaking contest. Over the past 23 years, Davis has taught woodworking to more than 1,200 students. While only a small percentage of his students pursue woodworking careers, Davis said he is resolute in teaching them basic skills and essential safety to be successful. 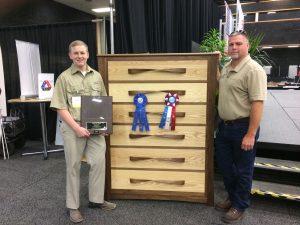 ‘Something to Shoot for’
Davis is a WCA accredited skills evaluator and his program has been a WCA EDUcation member from the onset. Students who take a third semester in the DJCC woodworking program are introduced to the WCA skill standards and Passport program with the opportunity to earn a Sawblade Certificate.

“The WCA gives the kids something to shoot for and show what they learned by being evaluated on it,” Davis said. “It’s a great starting point.”

Each of the three students working toward their Green Certificate is already a Sawblade Certificate holder. “They have been successfully evaluated on measuring, performing accurate cuts and proficiency on basic equipment,” Davis said.

Davis said the money donated by Lutz Woodworks will pay for half of each student’s skill assessments. “I think it’s important that the kids pay something out of their own pocket so that they have a buy-in on this.”

In addition to embracing the WCA skill standards and Passport program, Davis challenges his students to participate in competitions like SkillsUSA and student design contests at IWF in Atlanta and the AWFS Fair in Las Vegas.

“Students taught by Joe Davis at the Dale Jackson Career Center are always contenders in cabinet building competitions,” Lutz said. “When you see some of the furniture that his students make that would cost really good money to buy, then realize that it was made by a high school girl or boy, you appreciate the passion that Joe brings to teaching these kids to do such amazing things.” 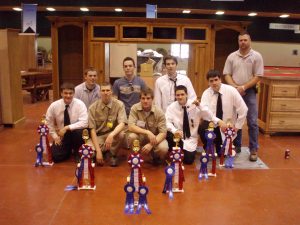 Working with Industry
More advanced students in Davis’ program have the opportunity to participate in paid internship programs with local woodworking companies including PIN, Greenpoint Technologies, Laminate Works and many others.

“We host a career fair once a semester,” Davis said. “I always encourage woodworking owners to come talk to my students. They have to make the effort to build a relationship if they want to hire one of them.”

Ironically, in spite of his close relationship with Davis and the DJCC, Lutz has not been able to hire interns because his shop is about one hour away on the other side of the Dallas-Ft. Worth metroplex.

“We may not be able to reap the benefits of one of these three students coming to work for us, but I think the bigger picture is that we need to do something to grow our industry,” Lutz said. “It might only be a little bit of money but I almost feel a moral obligation to help.”

Lutz said he is making plans for his company to join the WCA as a MANufacturing member at which time it can initiate employee training and incentive programs premised on the WCA’s Passport and skill standards.

“The men and women that we have on the production floor often times don’t get a lot of additional training credentials to show their skills and be proud of,” Lutz said. “We can base their wage increases on skills development. That gives an employee more reason to better himself and this will make our company better in the process.”

Learn how to support your local woodworking program by becoming a WCA INDustry Supporter Sponsor. 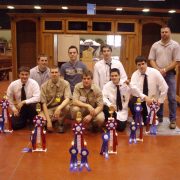 The ‘Canadian Connection’ Featured in Winter Pathways
Scroll to top