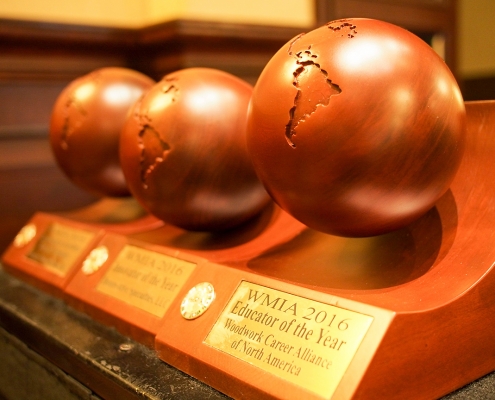 The annual award program has brought well-deserved recognition to woodworking instructors and schools, including many EDUcation members of the Woodwork Career Alliance.

In accepting the 2018 WMIA Educator of the Year Wooden Globe Award, Joe Davis, woodworking instructor of the Dale Jackson Career Center, became the seventh representative of the Woodwork Career Alliance of North America to receive the prestigious honor since 2008.

Adding to this impressive reign of achievement, WCA affiliates, plus the WCA itself, have received the award from the Woodworking Machinery Industry Association in each of the last six years. The WMIA established the Educator of the Year Award in 1988 to recognize the outstanding dedication of educational institutions, companies and instructors to train individuals for careers in today’s high-tech woodworking industry.

“Since its founding in 1978, WMIA has worked not only to serve its members, but also to help secure the future of the industry,” said WMIA President and CEO Larry Hoffer. “There’s no more effective way to ensure a vibrant future workforce than through education, an area in which WMIA has demonstrated a strong commitment over the last 30 years. WMIA’s Educator of the Year Wooden Globe Award has recognized some of the leading educators across the country, and this recognition is equally as important as our efforts in providing scholarships to students so they can further their education.”

“Choosing the annual Educator of the Year is a big part of our responsibility,” said Chris Hofmann, chairman of the WMIA Education Committee and product specialist of Colonial Saw. “We look for someone who is not only an outstanding educator, but who cares enough to put forth a ton of effort for their students. It’s been great to see the high caliber of nominees that we review and speaks well about the track record of WCA and its members who have risen to the top. They are real standouts in almost every way.”

Scott Nelson, president of the WCA, said he appreciates the WMIA for elevating the importance of woodworking education through its annual award program. “I think the award shows that these are the guys who are doing the work in the trenches and it’s very outstanding that the WMIA is recognizing the job that these educators are doing to teach our next generation of woodworkers. I appreciate all of the publicity they give not only to WCA but to the individuals and their schools. There are many very good programs out there that people don’t know about. I think it shows the value of using the skill standards the WCA has provided to credential their students.”

“People complain about where the next generation of woodworkers is going to come from.”  Hofmann added. “That’s why I think these are kind of the unsung heroes of our industry. They are trying to bring the next generation of woodworkers forward. I think there is a lot of respect among the students and graduates of these programs and how they helped them gain skills that can put them on the right track to further their careers.”

WCA Winners of WMIA Educator Award Honor Roll
The following WCA members may be unsung, but they are not unheralded, thanks to being recognized with the WMIA’s Educator of the Year Award.

2018 Educator Award Winner: Dale Jackson Career Center, Lewisville, TX
Accepted by Joe Davis, mill and cabinet instructor
Over the past 20-plus years, Joe Davis has taught woodworking to more than 1,200 students. Davis is an accredited skills evaluator of the WCA and his program is a founding WCA EDUcation member. High school students who take a third semester in the DJCC woodworking program are introduced to the WCA skill standards and Passport program with the opportunity to earn a Sawblade Certificate. Many of Davis’ students have gone on to lead successful careers as woodworkers.

2017 Educator Award Winner: New England School of Architectural Woodworking, Easthampton, MA
Accepted by Greg Larson, owner/director
Greg and Margaret Larson took over the school in 2012 and expanded it to include architectural woodworking career training. Larson described the program as offering a “very real-world experience” to students, who average 32 years of age and include both young people starting out and older career changers. The private school’s program includes building and installing kitchen cabinet projects for the local community.

2016 Educator Award Winner: Woodwork Career Alliance of North America, Nellysford, VA
Accepted by Scott Nelson, president
Scott Nelson was recognized for his “tireless leadership” of the WCA, a not-for-profit organization founded in 2007 to address the woodworking industry’s critical skilled worker shortage through the development of industry-recognized skill standards. The WCA has developed observable and measurable performance standards and assessments for more than 240 woodworking machine operations. In addition, WCA has enrolled more than 120 secondary and postsecondary institutions as EDUcation™ members, issued over 1,600 WCA passports, and trained more than 180 accredited skill evaluators.

2015 Educator Award Winner: Wood Technology Institute at Pittsburg State University, Pittsburg, KS
Accepted by Doug Hague and Charles Phillips, woodworking instructors
The Wood Technology Institute is a highly acclaimed training center and the heart of PSU’s Architectural Manufacturing Management & Technology program. In addition to their roles as woodworking instructors, Doug Hague, who has since become the Education Director of the Architectural Woodwork Institute, and Charles Phillips were lauded for conducting the first WMIA BootCamp to train woodworking suppliers about wood manufacturing processes. The success of that program led to the development of BootCamps for service technicians.

2014 Educator Award Winner: Greater West Town Project, Chicago, IL
Accepted by Doug Rappe, program coordinator
Since being established in 1993, the GWTP has trained and placed some 900 low-income adults with jobs at local woodworking businesses. In recent years, the GWTP has issued a WCA Passport to each of its graduating students. Doug Rappe, program coordinator and a WCA accredited skills evaluator, has been involved with GWTP since its inception. The WMIA honored him for his long-standing dedication to workforce development.

2008 Educator Award Winner: Madison Area Technical College, Madison, WI
Accepted by Patrick Molzahn, director of cabinetmaking and millwork
Patrick Molzahn, author of the fifth edition of Modern Cabinetmaking, is a founding board member of the WCA and recently became the first woodworker to earn the WCA’s Diamond credential. The one-year degree program Molzahn oversees is housed in a well-equipped facility valued at over $1 million. It is organized around lean principles and the WCA skill standards that he helped formulate. In addition to using traditional woodworking equipment and hand tools, students receive hands-on training in the latest CNC machinery and software. 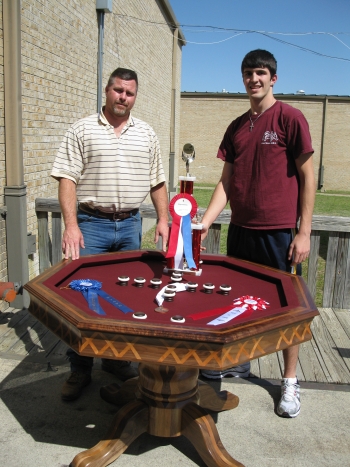 Joe Davis, with one of his many award-winning students.

Joe Davis, woodworking instructor at the Dale Jackson Career Center, of Lewisville, TX, received the 2018 Educator of the Year Award from the Woodworking Machinery Industry Association.

Davis is an accredited skills evaluator of the Woodwork Career Alliance of North America; his program is a founding WCA EDUcation member. High school students who take a third semester in the DJCC woodworking program are introduced to the WCA skill standards and Passport program with the opportunity to earn a Sawblade Certificate. Many of Davis’ students have gone on to lead successful careers as woodworkers.

Davis received the Wooden Globe Award for being an outstanding woodworking educator during the 2018 Woodworking Industry Conference in Maui. He was nominated by Erich Mazurek, president of Maze Machinery.