Thank you for your membership and support!

Find a WCA EDUcation™ woodworking program in your area. 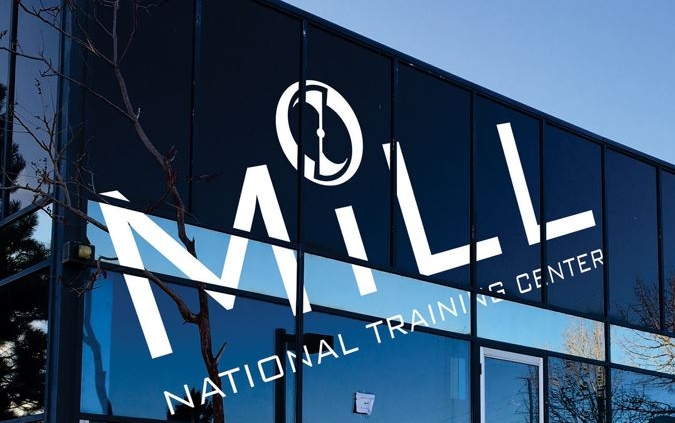 The Cabinet Makers Association (CMA) will host a regional event on Friday, Nov. 9 in Colorado Springs, CO. The one-day event will be held at the MiLL National Training Center and include a tour of Concepts in Millwork.

The MiLL is a WCA EDUcation™ member; the CMA is an Association Partner of the WCA.

“Many of our members learned about the MiLL and their partnership with Concepts in Millwork during our 20th Anniversary Conference in March,” said Amanda Conger, executive director of the CMA. “The November event provides members the opportunity to experience the program for themselves.”

The day will begin at the MiLL so that attendees can learn more about its program and see the facility during a school day. Then representatives of Concepts in Millwork will lead a discussion of what it takes to create a successful internship program. The panel will include an  employee of Concepts in Millwork who will share his story about transitioning from being a student intern to becoming professional woodworker. Finally, the group will tour Concepts in Millwork to see its production facility and other former MiLL students at work.

“The panel discussion with Concepts in Millwork is for anyone who wants to learn about how to attract and retain workers,” said Dean Mattson, founder of the MiLL. “Concepts is doing it right and has had 100% success with the program.”

Mattson added that in order to effectively manage today’s generation of new workers companies need to change their management style. “Essentially managers need to be sensitive to young people’s needs,” he said. “They need to be nurtured and know they are cared for.”

The registration fee for the event is $55 for current CMA members and $75 for non-members. Student/instructor members are free, while non-member students/instructors are $25. Registration includes lunch.

For more information and to register, visit cabinetmakers.org/events.

The CMA has been hosting high-value events like this since 1998 as a means of connecting similar-sized shops around North America with the purpose of sharing best practices and business acumen, while learning how other businesses do what they do. In addition to the agenda, the regional events also encourage networking by providing an opportunity to talk shop and share issues, solutions, and even projects. Although dubbed “regional,” the association expects this event to draw attendees from across the country as well as Canada.

About the Cabinet Makers Association
Celebrating 20 years, the Cabinet Makers Association was incorporated in 1998 by a group of custom cabinet makers who thought the small to mid-size shop needed to network and help each other grow profitably. Currently, CMA membership is made up primarily of 20 or fewer employee operations, with the vast majority of those being 1-5 person shops. For more information, visit cabinetmakers.org. 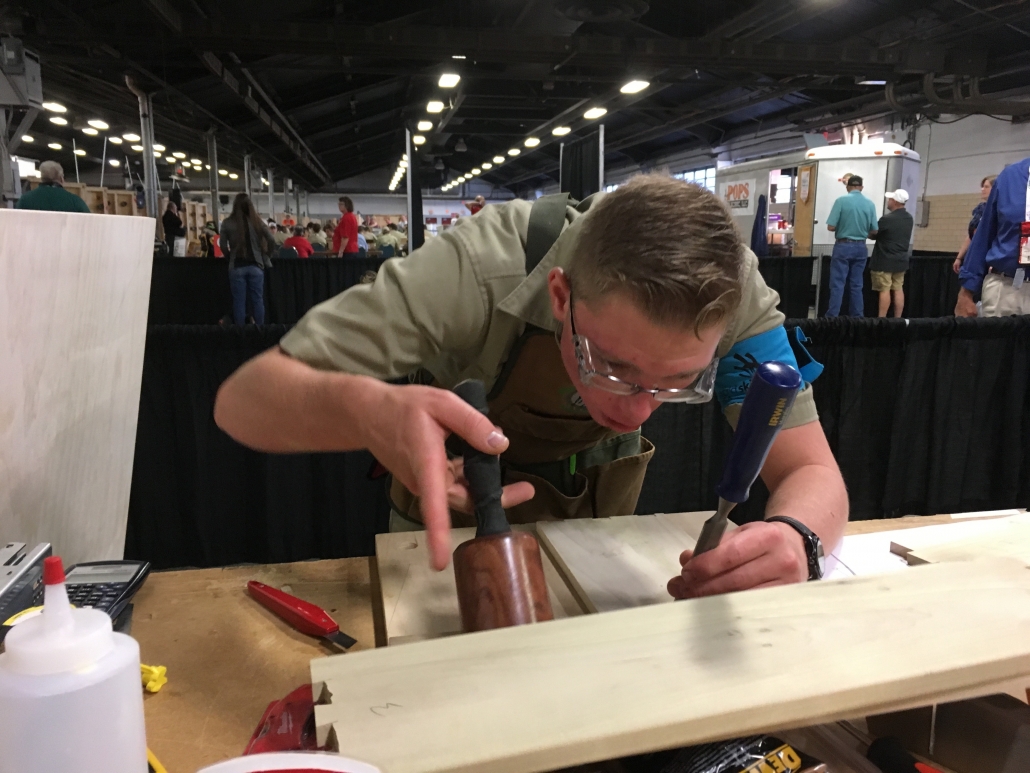 Ethan Harrison of Blackfoot, ID, will represent the USA in 2019 WorldSkills in Kazan, Russia. 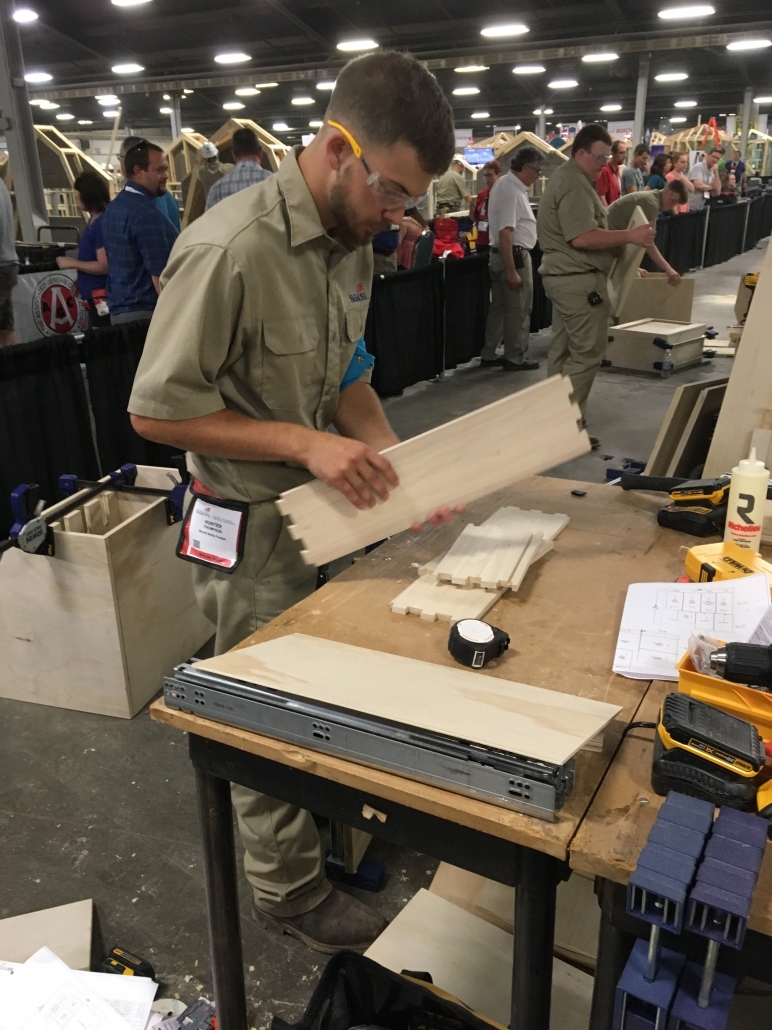 Hunter Thompson, will serve as alternate for USA in the 2019 WorldSkills. 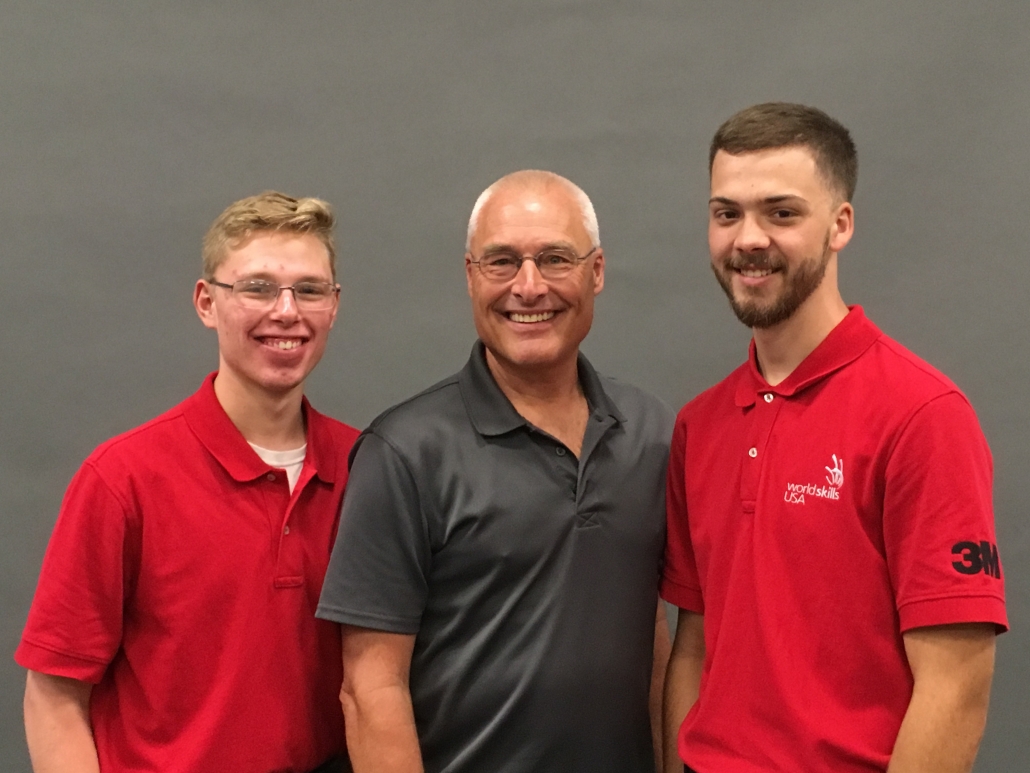 Ethan Harrison, a 2018 graduate of Blackfoot High School of Blackfoot, ID, will represent the United States in the biennial WorldSkills cabinetmaking competition Aug. 22-27, 2019 in Kazan, Russia.

Harrison earned the honor by winning a head-to-head competition at SkillsUSA last month in Louisville, KY. Runner-up, Hunter Thompson, a 2016 graduate of Cedar Ridge High School of Hillsborough, NC, will serve as the alternate if Harrison is unable to compete in WorldSkills 2019.

First held in 1950 in Madrid, WorldSkills aims to “raise the profile and recognition of skilled people and show how important skills are in achieving economic growth and personal success.”

“Both Ethan and Hunter did an excellent job in the run-off,” says Jeff Molzahn, a woodworking instructor at Madison College and newly appointed WorldSkills cabinetmaking advisor for SkillsUSA. In that advisory role, Molzahn will coach Harrison as he prepares for WorldSkills. He says he plans to build Harrison’s training program around the Woodwork Career Alliance’s skill standards.

“One of my goals is that Ethan will earn his WCA Green Credential during his WorldSkills training,” says Molzahn, a WCA accredited skills evaluator. “I think the WCA skill standards and evaluation process will dovetail nicely to get ready for WorldSkills. When you are getting your certification, you have an evaluator watching you work. While you might be really good on a table saw or other equipment, it’s a different experience having someone standing over and judging you. I think that experience will go a long way to help prepare Ethan for the pressure he will face on the big stage in Kazan.”

Both Harrison and Thompson qualified for WorldSkills by virtue of their solid placing in recent SkillsUSA competitions. Thompson won a gold medal in 2016. Harrison won silver in 2017.

Harrison says he only began learning woodworking as a sophomore at Blackfoot High School. His instructor, Peter Golinveaux, quickly realized his potential and encouraged him to compete in the state SkillsUSA competition. “He was my mentor and helped me with any question I had,” Harrison says. “I have really come to love woodworking; it helps me de-stress.”

Harrison says he prepared for WorldSkills using hand tools he purchased with scholarship money established in the honor of Rhett Fields, a Blackhawk High student who died in a motorcycle accident at age 17.  “Rhett was supposed to go to SkillsUSA nationals then he had his accident,” Harrison says. “He really inspired me and I really wanted to win this for him.”

Preparing for WorldSkills will dominate Harrison’s life during the next year. After the competition he plans to do missionary work then attend college. “I plan to build furniture to pay tuition,” Harrison says. “After I graduate I would like to have my own custom furniture shop making rocking chairs, tables and other one-of-a-kind pieces.”

Thompson already has a WCA Green Credential and is working toward his Blue Credential. He studied woodworking for four years under Keith Yow, woodworking instructor at Cedar Ridge High School, a WCA EDUcation member. “The WCA Passport program was a good structure to build my skills on,” Thompson says. “Mr. Yow, my instructor, was very helpful in my development and a great role model throughout my high school years.”

Thompson just completed his associate’s degree at Alamance Community College and will enter North Carolina State University as a junior this fall to pursue a degree in sustainable materials and technology. Upon graduating he wants to get a work for a large woodworking company. His ultimate goal is to run own furniture and cabinet business.

“Just being a finalist for WorldSkills was wonderful,” Thompson says. “It will look great on my resume.”

2018 SkillsUSA Medalists
In addition to the WorldSkills qualification contest, SkillsUSA featured the annual Cabinetmaking competition for postsecondary and high school students from around the country. 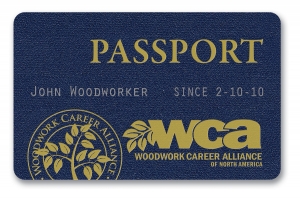 Nellysford, VA – The Woodwork Career Alliance of North America (WCA), celebrating its 10th anniversary as the champion of woodworking skill standards, will present a well-rounded collection of workforce development tools and strategies at the AWFS Fair July 19-22 in Las Vegas.

Since it was chartered in 2007, the WCA has developed Skill Standards for more than 240 woodworking machines and operations and issued nearly 1,400 individual skill credential passports. The standards and passports are recognized by educational institutions and woodworking companies operating throughout the United States and Canada. The overarching goal of the WCA is to develop and grow the industry’s workforce by creating pathways for woodworkers to advance their careers and income as they learn new skills.

The WCA’s booth #9846 will anchor the AWFS Fair’s new “Higher Education Learning Pavilion” (HELP). Woodworking instructors can stop by the WCA’s booth to learn about the benefits of becoming an EDUcation® member. Woodworkers and suppliers can learn about the value of WCA INDustry membership. The WCA also will preview first generation training materials developed by Madison College instructor Patrick Molzahn, a WCA Chief Evaluator. In addition to more than 50 videos, Molzahn has assembled training outlines, teaching notes, exercises and activities to help build a woodworking candidate’s skill and knowledge. All of these training tools are correlated to his recently revised textbook, Modern Cabinetmaking, and represent a major new benefit for INDustry and EDUcation members.

Molzahn will be joined by fellow WCA chief evaluators Kent Gilchrist and Greg Larson, to present accredited skill evaluator training sessions slated for each day of the show. These train-the-trainer workshops teach woodworking program instructors how to evaluate passport holders’ skill standard achievements. Woodworking instructors interested in reserving a seat for one of the evaluator training sessions should contact WCA President Scott Nelson at snelson@gmail.com

The WCA will be well represented in the AWFS Fair College of Woodworking Knowledge education program. Each of the three programs presented by WCA members will focus on workforce development. These timely WCA-led sessions include:

Learn more about the Woodwork Career Alliance and its Skill Standards and Passport programs at www.WoodworkCareer.org.

About the Woodwork Career Alliance
The Woodwork Career Alliance of North America was founded in 2007 as a 501C(3) non-profit corporation and is governed by a volunteer board of directors. The WCA’s mission is to develop and administer a unified set of Skill Standards for the wood products industry. Since 2011, WCA has developed observable and measurable performance standards and assessments for more than 240 woodworking machine operations. In addition, WCA has issued more than 1,400 Passports, a portable, personal permanent record documenting each holder’s record of achievements as a woodworking professional. More than 165 high schools and post-secondary schools throughout North America are WCA EDUcation members. To learn more about the WCA and how to get involved with its programs, visit www.WoodworkCareer.org.