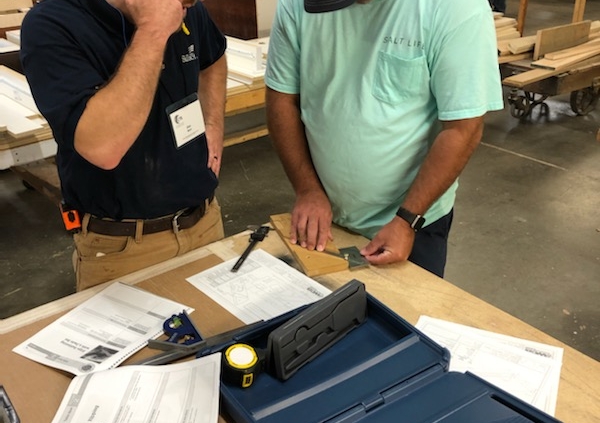 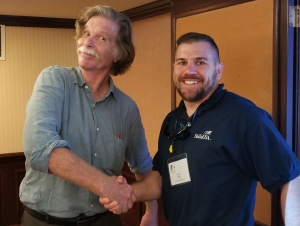 Dan Kern, woodworking instructor of Montgomery County high schools in North Carolina, is walking the talk. Not only is the holder of Woodwork Career Alliance Passport #110 employing the WCA skill standards to teach his students how to safely craft wood, he’s personally advancing his way through the WCA’s five-level credentialing system.

“Whenever I first discuss the WCA skill standards and credentialing system with my introductory woodworking class students, I’m sure to get asked what level I’m at,” said Kern. Now in his 16th year of teaching, Kern said he is happy to tell his inquisitive students that he recently completed his blue credential and is now working toward achieving the red patch, the third rung of the WCA credentialing ladder.

Kern’s involvement with WCA extends well beyond being a Passport holder in good standing. He was certified as a WCA accredited skill evaluator (ASE) in 2012 and successfully completed a special training session at the 2018 International Woodworking Fair to become WCA chief evaluator for North Carolina. In recent years, Kern has also taken on a leadership role to coordinate programming for the woodworking track of the annual North Carolina Career and Technical Summer Conference. As was the case last year, Kern integrated hands-on WCA credentialing into the CTE Summer Conference held July 15-18 in and around Greensboro.

More specifically, Kern and eight of his peers – all of them WCA Passport holders and most of them WCA ASEs – earned tool points by taking a wide range of woodworking skill tests at Rowland Woodworking’s shop in High Point.

“We basically took turns evaluating each other on different machine operations,” Kern said. “I was among the group of guys who was working on the blue credential. We worked on setup and operation of a sliding table saw, jointer, side stroke sander and more. The other group of teachers were working on green. They worked on a stationary table saw, bandsaw and miter saw.”

Following the evaluations, the instructors adjourned from the shop to Rowland Woodworking’s conference room equipped with A/V presentation tools. “I showed them how easy it is to buy the WCA skill points on the WCA’s website and then instructors took turns inputting the data of other instructors into the WCA’s registry,” an online database of each Passport holder’s achievements. “The Passport database is a key part of the WCA,” Kern said. “A lot of educators get bogged down by the workday. My goal was to show them how to streamline the process. Once you get familiar with the system, it’s not so intimidating.” 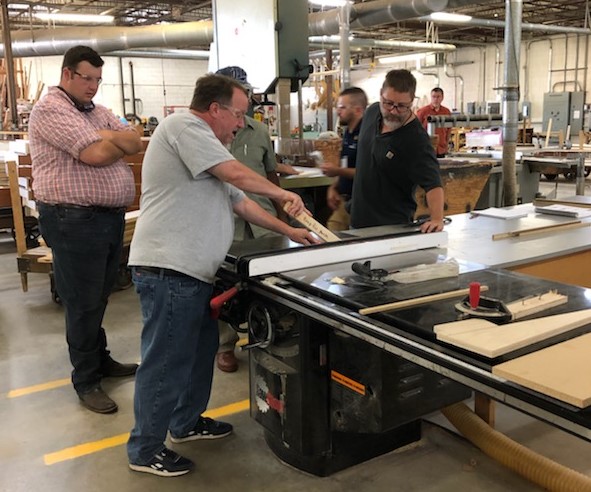 More Summer CTE Conference Highlights
The WCA evaluation day was but one of the many highlights during the woodworking track that included a larger audience of woodworking instructors who are not active WCA Passport users as well as instructors involved in teaching carpentry and other trades. Kern shared some of the other programs that took place, including:

CTE Center to Open in January
Looking ahead, Kern, who started West Montgomery High School’s woodworking program in 2005, said he is looking forward to the opening of a new 68,000-square-foot Career and Technical Career Center in January. The CTE Center will include a 1,600-square-foot “state-of-the-art woodshop,” he said.  “It will also have a 1,000-square-foot mezzanine above it and a 600-square-foot classroom.” 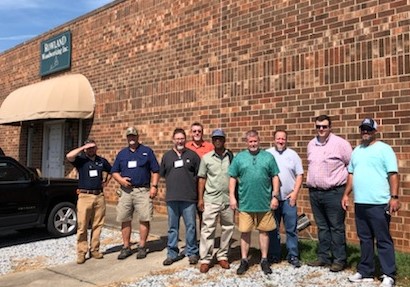 The CTE center is located adjacent to Montgomery Community College, which will also offer classes at the facility. In addition to woodworking, the CTE center will offer courses in EMT, agricultural sciences, welding, industrial systems, forestry and more.

The new woodshop will be a welcomed departure from the antiquated quarters at East and West Montgomery High Schools, Kern said. “At our current shops, we were limited because we didn’t have three-phase power. At the CTE center we’ll have four new machines including a widebelt sander, an industrial planer, a big jointer and an oscillating side stroke sander.”

Kern said the WCA skill standards and Sawblade certificate will continue to be the foundation of his course curriculum.

“North Carolina has adopted WCA as the official certification for our woodworking classes. I require all of the students in my second level class to be evaluated and tested for their Sawblade certificate and it’s an option for students in my introductory class. We try to write the curriculum and make the course blueprint around the WCA skill standards. Our first objective is safety then we focus on the importance of accurate measurements. We have tape measures and calipers out the first week so that students can learn about that in the introductory class. For my Sawblade certification I try to have a project that involves all of the Sawblade core skills – table saw, ripping, drilling to a controlled depth and sanding flat surfaces, joining the first edge, etc.”

Kern said he typically teaches up to 75 kids each semester spread over four classes. “The state supports two semesters: woodworking one and woodworking two. We have a curriculum for woodworking three that’s combined with my level two class and allows more advanced students to work independently. After they complete those three, we offer an advanced study session which requires the student to create a portfolio, maintain a journal of their work, complete a final project and give a presentation at the end of the semester. I’ve had a lot of success with that; it’s really cool. I usually get a few kids each semester and they work almost exclusively independently. They have to submit a product they designed early in the school year and then build it. Beyond that we support apprenticeship opportunities. Last year we had a young man placed in a furniture factory.”

On a personal note, Kern said that while he is only beginning to work on his red credential, he already has his sights on gold and ultimately diamond.

“I would love to achieve diamond; that’s my ultimate goal. I still need lots of tool points. I’ve been talking about meeting up with other CTE teachers located a couple of counties away on Saturdays to try to work toward that.”