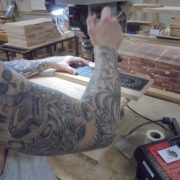 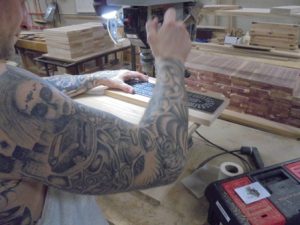 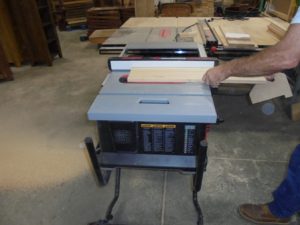 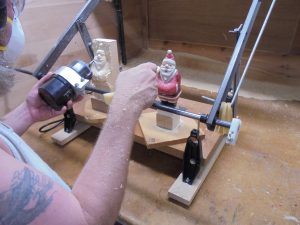 Twenty-five convicted felons at the state maximum correctional center in Warren, ME, are participating in a pilot program with the Woodwork Career Alliance of North America. Each of the inmates was recently issued a WCA Passport to document his woodworking skills, setting him on a path for a fresh start upon his reentry into society.

The 25 new passport holders, each slated to be released within the next eight years, are among 140 inmates who work in the prison’s woodworking shop. There they learn about woodworking procedures and how to operate standard machinery including tables saws, planers, sanders and table top routers.

“All but about 30 of the inmates in our program are going to be released at some point,” said Ken Lindsey, industries manager, of Maine State Prison. “We want to train them so that they have good machinery skills. But we also want to work on their people skills to make sure they get along with others and are able to take direction from the staff. That’s a big part of the rehabilitation process.”

To get the program rolling, Greg Larson, director of the New England School of Architectural Woodwork and a member of the WCA Board of Directors, visited the prison to certify two inmates as WCA accredited skill evaluators. They in turn are responsible for testing individual inmates on specific woodworking and machinery skills. The individual is awarded a passport “stamp” for each test he passes. Through the combined accumulation of skill stamps and hours working in the woodshop, the passport holder can earn his WCA professional credentials that progress from Green to Diamond.

A Self-Supporting Enterprise
Lindsey and members of the woodshop staff are all former guards. Other Maine State Prison industry programs under Lindsey’s purview include upholstery, a machine shop, finishing and a plate shop which among other products makes license plates.

The woodshop is about the size of a football field. It contains more than 7,000 tools, a lot to keep track of in a prison environment, Lindsey noted. Among the newest machinery in the shop are five SawStop table saws and five SawStop contractor saws. “We really want to step it up and make things safer for the inmates and the staff,” Lindsey said.

Most of the products made in the woodshop are crafted from pine and ash lumber harvested, milled and dimensioned to final size by convicts at the Charleston Correction Facility, located about two hours north of Warren. The Warren inmates craft everything from novelties like ship models and jewelry boxes through larger furniture items such as bookcases and cupboards.

Eighty percent of the products are stained and sealed. They are by and large sold through a retail showroom in Thomaston. The showroom is a popular tourist destination during the summer and does about $1.6 million in annual sales.

“We are primarily a self-supported program with the exception of a couple of staff salaries,” Lindsey said. “Everything we have in the shop – machines, materials, tools – and inmates’ pay comes out of what we sell at our store in Thomaston. There are very little tax dollars spent on this program.” Lindsey added that the shop’s annual sales could be far greater if not for interstate commerce laws that prohibit sale of the prison shop’s products across state lines.

WCA Passport Pride
“The 25 guys who were chosen are proud to be in the passport program because they know it can help them,” Lindsey said. “If you are an ex-inmate, the job market can be tough. That can be one strike against you. But if you have the passport, when you apply to a woodworking company they will judge you more on whether you can handle a piece of machinery or can start day one as a productive worker than on whether you served time.”

“It’s too bad we didn’t know about the WCA sooner,” Lindsey added. “We have guys who get released with 10, 15 or more years of working in the woodshop for six to seven hours a day, five days a week. They have spent a lot of time on a variety of machines.”

Because of their years of experience working in the woodshop, Lindsey said the initial 25 passport holders should be able to quickly accumulate skill stamps. “They’ll breeze through the accreditation process of the different machines they have operated,” he said.

Lindsey said he is excited to watch the budding passport program grow and branch out. “We wanted to start off a little small and work the bugs out,” Lindsey said. “We’re constantly bringing in new workers so we’ll have no problem adding more inmates to the program. I know our central office in Augusta is watching behind the scenes to see how well this works. If it takes off here they may move it to some of the smaller woodshops at our other state prisons.”

“A lot of guys in our program messed up one time. They realize what they did was wrong,” Lindsey said. “After they do their time and get out they’re older and more mature. They are ready to move on with their lives and support their families. Hopefully the passport will help them have a living wage and an opportunity to do something they enjoy.”