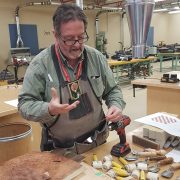 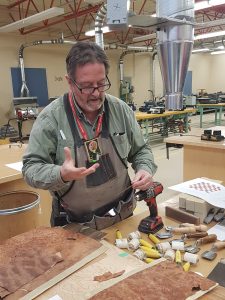 Mick McGowan is leading the charge to spark Canadian interest and involvement with the Woodwork Career Alliance of North America (WCA).

McGowan, an accomplished cabinetmaker, college instructor and member of the WCA Board of Directors, is working on multiple fronts to help the WCA woodworking skill standards and Passport credential program gain traction in his home province of Alberta and beyond. Ranking high among his WCA-related projects, McGowan was contracted by the Calgary Board of Education to train about a dozen high school woodworking instructors to become WCA accredited skill evaluators.

“The end game is that once all of these guys are accredited and their credentials are established, they are going to birth WCA programs in their respective high schools,” McGowan said. “Hopefully this will spread to other public and separate high schools in Calgary and the province. I find this very exciting. I think once we get the WCA established that it will really fill a big need.”

That big need to be filled is bringing more skilled talent into the woodworking industry to alleviate a critical challenge faced by wood product manufacturers throughout the United States and Canada. The WCA was established in 2007 to develop and grow a skilled workforce. It has created more than 240 performance-based skill standards used to evaluate the proficiency of student and professional Passport holders. They can grow their careers and earnings potential by earning skill credits added to their personal Cloud-based Passport account.

“What I like about the WCA program is that it’s not a training program,” McGowan said. “It’s freestanding, voluntary and established. That means you can train someone any way you want. You can use your existing training framework and use the WCA for evaluation and credentialing. It’s very flexible and establishes a coast-to-coast skills standard. A Passport holder can move from one part of the country to another and impress a potential employer with the Passport credentials they have obtained.”

Getting the Ball Rolling in Calgary
McGowan has the credentials and connections to take on the job of launching Canada’s first WCA EDUcation programs. 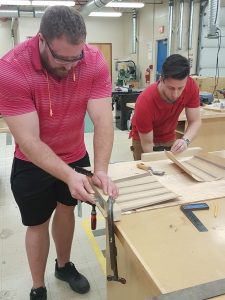 McGowan has been a professional woodworker since 1976 when he began his apprenticeship and eventually achieved journeyman cabinetmaker status. He has operated his own custom woodworking business and has instructed woodworking courses at SAIT Polytechnic since 1994. For the past 12 years McGowan also has been very active with Skills Canada, helping to coordinate the annual competition in Alberta, representing the province on the national Skills Canada technical committee and as expert or trainer with Canada’s World Skills team since 2005. For his efforts, he was named 2016 Skills Canada Alberta Volunteer of the Year. His volunteerism has extended to the WCA as a board member and author of woodworking skill standards.

Just over a year ago, the Calgary Board of Education reached out to McGowan to provide professional development training for high school woodworking instructors. Woodworking is included in the Calgary public school system’s Career and Technology Foundations program.

“The school system has a lot of well-intentioned and knowledgeable woodshop instructors but few if any have actual woodworking credentials,” McGowan said. “They were hired because of their teaching credentials. Some are semi-trained woodworkers at best. They are mainly avid amateurs and many of them are quite good.”

McGowan said the monthly training program he created revolves around the WCA skill standards and Passport program. “Each of the teachers has his own Passport and is earning tool stamps,” McGowan said. “So far training has involved everything from making push blocks for a table saw on a jointer to making five-piece raised panel doors. They have all received training on table saws, chop saws, jointers, planers, table routers, handheld routers and working with veneer. Above all else, my classes emphasize safety.

“Once an instructor has been accredited as a WCA skill standard evaluator, the next step is for his program to become a WCA EDUcation member,” McGowan added. “Then he can start evaluating and credentialing student Passport holders. For kids who want to pursue woodworking, the Passport credential program should be very attractive for helping them prepare for a career.” 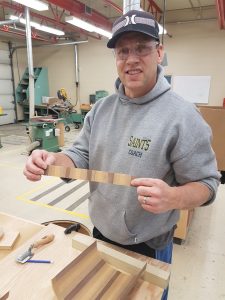 Travis Visscher, a high school woodworking instructor in Calgary, is among those being trained to become accredited skill evaluators of the Woodwork Career Alliance of North America.

Warren Ferguson, learning specialist for the Calgary Board of Education, said, “From my perspective, the WCA helps educators meet as a Community of Practice, thereby building our collective professional capital. Not all educators are able to participate in apprenticeship training in an institution of higher learning. This pathway, optional for teachers, is a structured system of skills development and assessment that connects well with what students are expected to know. It incorporates capacity building with external measures, which aligns with the writings of noted Harvard education professor Richard Elmore.”

Making Woodworking Cool to Youth
While many industry professionals claim it’s extremely challenging to get kids excited about woodworking, McGowan disagrees. “I don’t think its hard to get kids interested about woodworking. I think a big part of the problem is in the traditional model. We really need to have programs augmented with manufacturing automation without throwing the baby out with the bathwater.

“It’s important to teach traditional skills while not ignoring automation and CNC,” McGowan continued. “I think the CNC world makes woodworking appealing to kids because it’s not just Geppetto making wood carvings.  For example, at SAIT we really emphasize the fundamentals right back to hand tool skills and proper drafting of shop drawings. Then we teach students AutoCAD and they really get hooked on that. It opens up a lot of doors so that you can segue into manufacturing automation.”

‘The Power of Persistence’
Through his involvement with Skills Canada, McGowan has been able to inform fellow members of the technical committee about the WCA. “The committee is made up of educators representing each of the provinces. They all say they see the value of the WCA, but none have acted on it yet.

“If there’s one thing I’ve learned a lot about, it’s the power of persistence. Once we have established WCA high school woodshop programs in Calgary, it will be easier for others to learn from our experience. I’ve been with the WCA almost since its inception. They’ve come a long way, but there’s still a long way to go.” 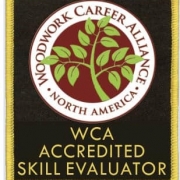 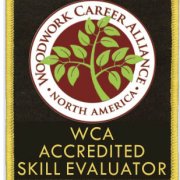